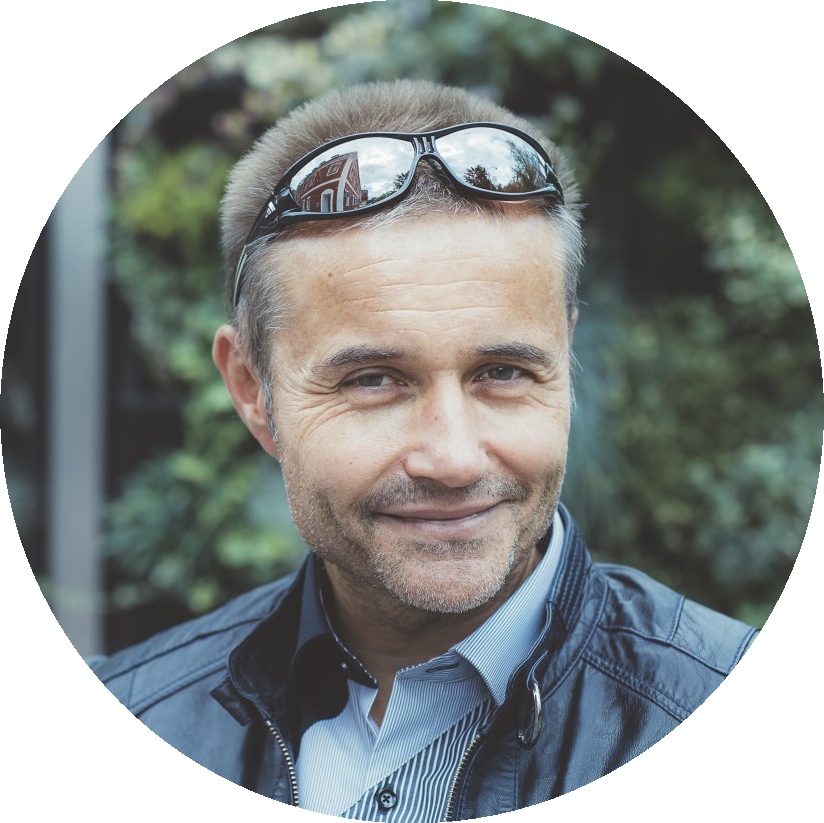 Get to the core of agile leadership

The business world is changing dramatically. Acceleration, growing complexity and permanently facing the unknown have become the norm. Organizations must respond faster with fewer resources to keep up with the ever-changing environment. Staying successful requires agility and hence, organizations that are more like »tent cities,« »speed boats« or »drones« and less like »castles,« »oil tankers« or »jumbo jets.« But how does this look in practice?

Here is a story of non-accountability from my own experience. In 2011, a client sought coaching and wanted to reflect her own role and leadership responsibility on the crisis of her own corporation. She was working as an executive in the department of innovative financial products at an Austrian bank. This bank was still deeply affected by the world financial crisis of 2008/09 due to a series of risky derivative transactions the institute had been involved in. The story she told was one of a lack of space for reflection and feedback in this environment. Any critical examination of risky business practices was interpreted as the personal weakness of the person who had the courage to point it out. It was a story of a lack of synopsis of the complex transactions whose overall risk was spread across several departments. Everyone could only see – like in the parable of the blind men and the elephant – the part of the elephant he or she was specialized in. And it was a story of financial targets aimed at the interests of shareholders only. From 12 percent ROI (Return On Investment), to 15 percent, to 18 percent and finally to 25 percent; they were set by the shareholders without any negotiation with management and employees as to if and how this could possibly be fulfilled. A potential negative impact of these unrealistic targets for the actions and mindset of the people inside were completely neglected.

The consequences were clearly noticeable. People inside the bank – both employees and executives – focused entirely on avoiding failure within their own individual responsibility. They sensed that something was going down but were no longer able to see the wood for the trees. Furthermore, in a basic atmosphere of anxiety and merciless pressure from outside, they felt unable to speak about it. Instead, they fell increasingly below the line (playing the blame game in the victims’ spiral). Connors and Smith (see e. g. recommended reading) described this phenomenon, referring to a behavior of excuse making, blaming others, confusion and an attitude of helplessness (see illustration). In their famous study »The Oz Principle,« they found out that in modern business environments full of dynamics, uncertainty and interdependencies, there is a lot of seduction and emotional incentives for managers and employees to keep themselves as a victim. This dynamic is often so powerful that it can trigger a major corporate crisis like in the case of Arthur Andersen, WorldCom or Enron or in the case of the Austrian bank mentioned above. Once stuck in the victim cycle, managers and teams play the blame game. They begin to lose their spirit until, eventually, they feel completely powerless. 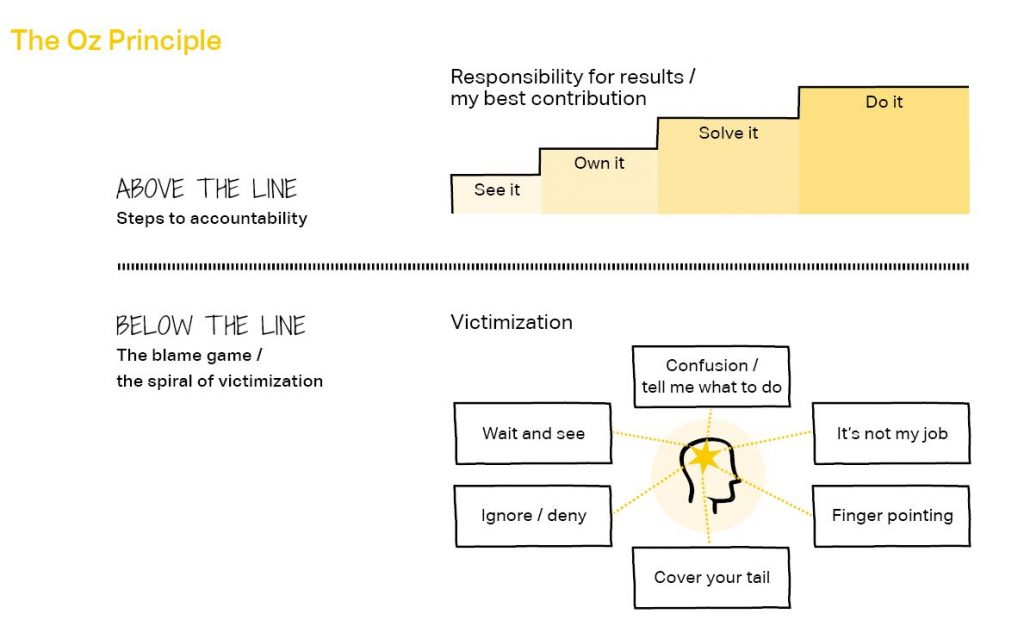 It usually begins with »ignore and deny« – creating an environment where no one acknowledges the truth and people don’t speak up since they perceive themselves as victims. As victims, they are hardly inclined any longer to devote additional effort without sufficient reward. »It’s not my job« becomes the typical excuse for inaction and avoiding responsibility. Finger pointing is the next stage aiming at denying responsibility for poor results and trying to shift the blame to others. Confusion is the third stage of pushing away responsibility. People fall back into typical hierarchical patterns and ask for clear commands. »Given all these mixed signals, just tell me exactly what to do and I’ll do it« is a typical request here seeking to avoid any risk of failure. It leads directly to a »cover your tail« behavior including actions like documenting everything in writing or sending back-up e-mail messages that can be used later as proof of innocence. The last stage of »wait and see« keeps people stuck in the victim cycle as spectators. They just watch to see if things will improve, enjoying the comfortable feeling of not having to admit to being wrong, nor losing face, nor doing anything differently in the future.

Get above the line

To overcome the victim cycle, an organization needs to build a leadership culture of accountability as well as a culture of shared responsibility for sustainable results. One of the biggest obstacles is that accountability is often afflicted with a negative touch. Webster’s Dictionary, for example, defines the word as »subject to having to report, explain, or justify; being answerable, responsible.« Accountability in this traditional concept impels people to account for what they have done in the past and is therefore often misused as an assignment of blame for failures. Following the ideas of Connors et al., accountability goes along with the ability to influence future events and outcomes before they happen. In a more agile mindset, the key question becomes »What can be my best contribution now in the given circumstances?« In this respect, accountability is experienced as a desirable result-oriented personal attitude of people in organizations shaping the organizational culture. Or in Connors’ words, »Accountability: A personal choice to rise above one’s circumstances and demonstrate the ownership necessary for achieving desired results – to see it, own it, solve it, and do it.«

A guiding concept for agile leaders is based on four steps:

I want to have clarity about what is happening in order to become better and grow. I consciously ask for feedback and other perspectives. I want to sense weak signals and look into them.

Own it
I ask myself honestly, »What has my contribution been to us facing this challenge/problem? What have I done? What haven’t I done?« Then I ask myself: »What can be my best role and contribution to find a solution so that we really can do better?«

Solve it
I am really involved in the solving process and ask myself continually, »What else can I do?« I stay mindful and challenge my own beliefs and assumptions about how I do things. I create new linkages and try to discover new ways of thinking to boost innovative solutions and avoid »downloading.«

Do it
I am prepared for the forces that could pull me back down below the line. I have clear priorities, a commitment to staying focused, and I am constantly measuring progress towards set goals. If obstacles emerge on the way toward implementation, I stay committed and keep myself »seeing,« »owning,« »solving« and »doing« until the desired results are achieved.

Agility is a concept with stable elements (purpose, principles and basic rules). It aims at enabling both commitment and reliability as well as a high degree of autonomy and trust for individuals and teams simultaneously. Leaders provide for and support agility by leaving behind the hierarchical framework of command, control and micromanagement. Instead, they become enablers and supporters. They lead with a coaching mindset and see to alignment and the level of energy in their teams and departments. In this regard, accountability is at the core of leading towards agility. By overcoming the deceptive traps of the victim cycle, a culture of accountability strives to mobilize the potential of every single person. Regardless of whether it’s an employee or manager, results come from people who take over accountability for accomplishing them. Hence, a culture of accountability enables an energetic, committed and mindful relationship between the behavior of people in an organization on the one hand and the desired results on the other. So, always keep in mind: see it, own it, solve it, and do it.