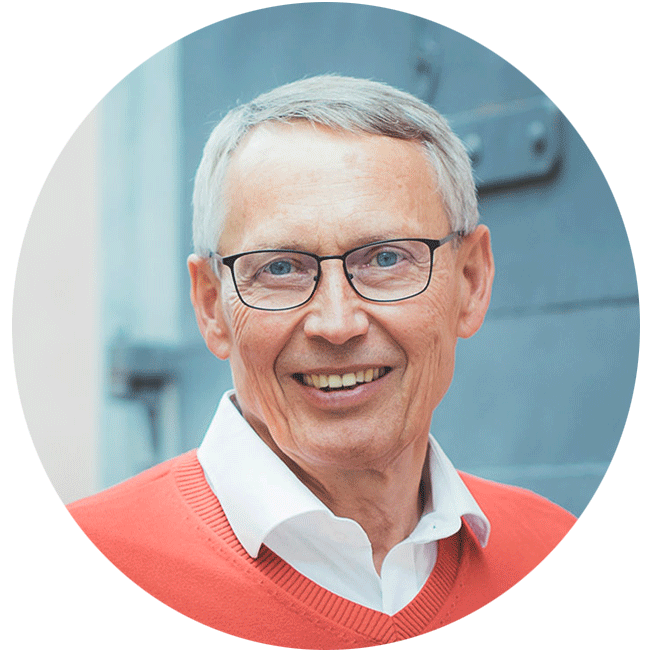 Use a key success factor to work effectively in agile environments

The better your people work together, the better your organization will meet the complex challenges of today’s interconnected environments. By anticipating human nature and using effective means of communication, you will be able to shape a better team.

Let’s find an example many of us can relate to. Since Nicole got her well-deserved promotion, she has been extremely motivated to manage her team properly. During her first meeting in a leading role, she notices that one of her team members is using a software tool incorrectly. She offers Tom some advice and continues with the meeting. Several days later, Tom is still misusing the tool. So, she decides to sit down with him to help him get it right.

Over the next few days, Nicole notices that Tom has become distant and somewhat detached from his work. He refuses her offers of support and avoids talking to her whenever possible. Nicole is perplexed and confused. All she wanted was to help Tom get it right. What went wrong? If Nicole had known the SCARF model, she might have been able to find a clue. She would have realized that Tom‘s intention was not to be difficult; he felt threatened. The way she handled the situation, she made Tom feel silly and stupid instead of empowered.

The model was first published by David Rock in 2008 in his paper »SCARF: a brain-based model for collaborating with and influencing others.« The model was developed based on results from studying the brain in the field of social, cognitive and affective neuroscience, which explores the biological foundations of how humans relate to each other and to themselves. SCARF is an acronym and stands for the five key domains that influence our behavior in social experiences: 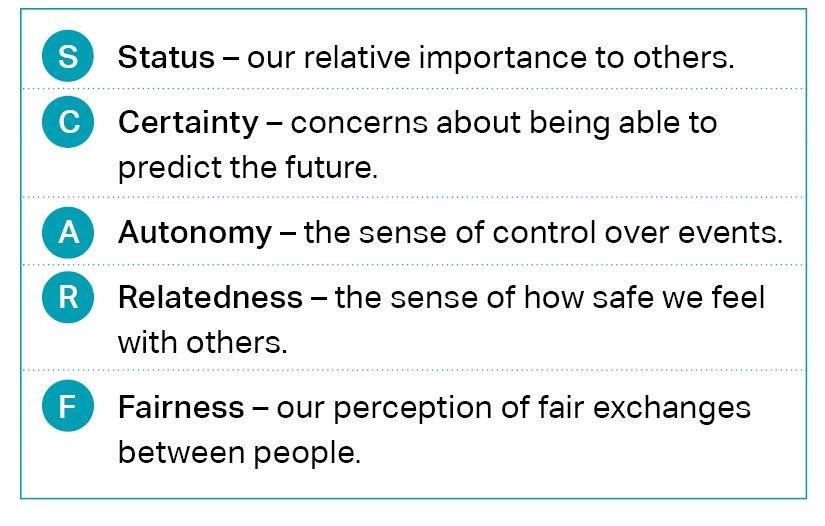 Each of these five domains either activate the threat or the reward responses in our brain. According to integrative neuroscientist Evian Gordan, the principle of »minimizing danger and maximizing reward« is an overarching organizing principle of our brain. It will either tag a stimulus as »good,« and the person will approach it, or tag it as »bad,« and the person will avoid it. This approach-avoid response is an important survival mechanism helping us to quickly decide what’s good for us and what’s bad.

These decisions are primarily triggered in the limbic system of our brain. Our reaction has often been determined even before we are consciously aware of the stimulus. This explains that we sometimes show strong emotional reactions to social situations – and why it’s often hard to control them. Not being part of a group might be perceived as a threat to our status and relatedness. Research has shown that this response stimulates the same brain region as physical pain; our brain is sending out the signal that we’re in danger. When we feel threatened – either physically or socially – the release of cortisol (the »stress hormone«) affects our creativity and productivity. We literally can’t think straight, and this increases the feeling of being threatened even further. On the other hand, when we feel rewarded, our brains release dopamine – the »happy hormone.« Eager for more, we seek out ways to be rewarded again.

Understanding these principles helps minimize the easily activated threat response and maximize positive engagement states of the mind while collaborating with and influencing others:

Our lives revolve around relative importance and how we experience our importance compared to others. It is about »pecking order,« seniority and our understanding of our place in the group as well as the world. Status needs to be established following every organizational change. As a leader in the digital age and of a more and more agile organization, you might need to think deeper about how to increase commitment levels and find new roles and rewards.

Certainty
Being able to predict the future is a safety feature. As our brain is a pattern-recognition machine, finding a pattern to predict the future allows the brain to save energy. Drive down a familiar road and your brain switches to an energy-saving mode, which feels like running on »autopilot« in this state. Every small amount of uncertainty generates an »error« response which cannot be ignored until it is resolved. Uncertainty generates stress and can even be debilitating. A big part of leadership is decreasing uncertainty and increasing certainty.

Autonomy
Provide people with control over their environment. The sense of having choices feels rewarding. Working in teams, however, reduces autonomy. This effect can be counteracted through an increase in status or relatedness or by setting up self-organizing teams. It may be hard sometimes for managers to provide choices instead of giving how-to directions, but it always pays off, as perceived autonomy releases dopamine and increases commitment.

Relatedness
How safe we can feel being around others is very important. We are very quick at deciding whether others are friends or foes. Over millions of years, we have learned to recognize whether we are inside or outside of a group. To form a team, it is essential to increase rewards in the form of relatedness. Fostering social networking and providing time for building personal relationships shows great effects.

Fairness
Have a close look at the perception of exchange; unfair exchange generates a strong threat response. Fairness influences engagement heavily. Statements like, »they talk the talk about cost-reduction, but at the top they still get their huge bonuses!« is a clear threat response. Transparency, clear expectations, an increase in communication and more involvement in business issues can help reduce the threat of unfairness. Perception of fairness is key; even a slight reduction in executive pay in difficult times will go a long way in lessening the feeling of unfairness.

Adopting the domains of SCARF as both a leader and a team member will lead to better and more effective cooperation.

»SCARF: a brain-based model for collaborating with and influencing others.« David Rock

RECOMMENDED READING
»SCARF: A Brain-Based Model for Collaborating with and Influencing Others« Neuroeadership Journal; David Rock; 2008